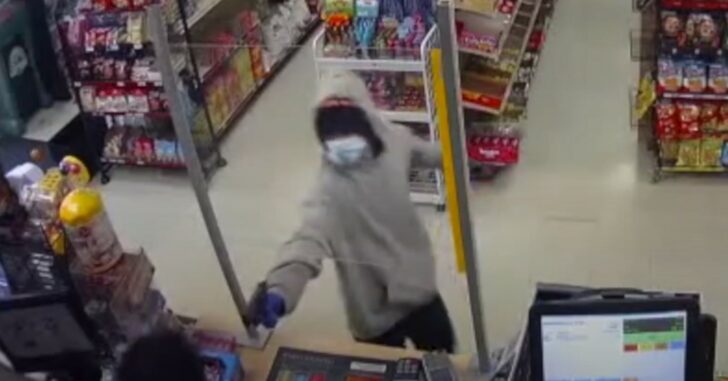 Around 9:45 a.m. on November 2nd, an individual wearing gloves, a hoodie and a medical facemask entered the PJ Mart in the 900 block of South Peoria Street. After walking around the perimeter aisles of the store, he gets a soft drink from the cooler and walks up to the counter.

With no one else in the store, he immediately pulls a pistol from the pocket of his hoodie and points it at the clerk.  The clerk runs from behind the counter with his own gun, forcing the robber to drop the gun, sit in the floor and raise his hands. When the clerk attempts to kick the gun away from the suspect, he picks it up and fires at the clerk, wounding him before fleeing the store on foot.

Anytime a gun is pointed at you in a robbery or other crime, you have two choices…comply or resist. If you comply or resist, you may or may not be shot.  Compliance and resistance can often mean the difference between life and death.  The intended victim has no way of knowing if the assailant will be content with money and property and leave them unharmed, or if they are intent on taking what they want and shooting the victim regardless.

No two situations are exactly the same, and it is a decision that the victim must make in a matter of seconds, based on many variables including the number of assailants, the physical circumstances, innocent bystanders, and others.

Most important is the knowledge, skill and ability of the victim. Good defensive equipment, training and practice with that equipment, mental clarity, decisiveness and the proper mindset are all required to mount a defensive response to any perceived threat.