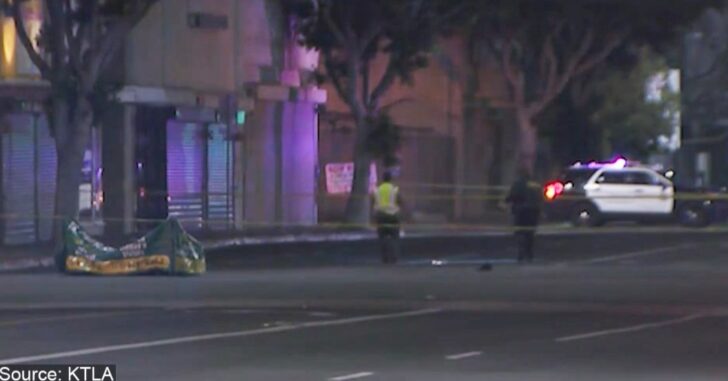 LOS ANGELES, CALIFORNIA — An armed man was stopped at a red light when police say another man came up to his window and pointed a gun. It was an attempted carjacking, but the target wasn’t going down without a fight.

“The suspect walked up to the victim while he was seated in his vehicle and brandished a handgun,” Deputy Schrader said. “The victim was armed and shot the suspect.”

The victim “then drove a short distance away for safety, and awaited the arrival of sheriff’s deputies,’ according to KNBC. This is a great move, getting yourself to a safer location while contacting police.

When the suspect was lying in the road, a passing car ran him over. They at first began to stop, but then decided to flee the scene.

Police have not identified the target, or if he has a concealed carry permit.

“The victim… has been cooperating with detectives as the investigation continues,” she said. “He has been interviewed and is not in custody. When complete, this investigation will be delivered to the Los Angeles County District Attorney’s Office for review and filing consideration.”

Having easy and safe access to your firearm while driving is something that man overlook. But just as fast as a home invasion can occur, a carjacking can happen at the same speed and give you little time to react.

Carrying on your person is the best option, and training to draw from a seated position is an important step to successful defense while inside your vehicle.

Previous article: [WATCH] Concealed Carrier Assaulted By Man Who Pulls Knife, And Makes Many Mistakes During This Incident Next article: New Bill Would Ban The Private Sale Of Firearms In Texas