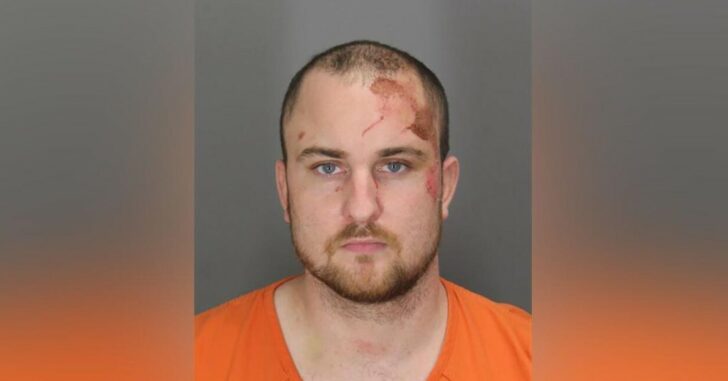 MADISON HEIGHTS, MICHIGAN – A 29-year-old “man” stabbed his parents, one of them fatally, after being asked to turn off his video games. His rage continued after officers and firefighters arrived on the scene.

A neighbor found Christopher McKinney and called police. “He was laying down in the hallway, and he had blood all over him”, said Madison Heights Police Chief Corey Haines, adding, “There was blood everywhere – all over the walls, the ceilings, the hallway.”

Authorities have determined that the tragic incident began with McKinney’s mother, 66, and stepfather, 71, asked him to stop playing video games in their room so they could go to sleep. He responded by punching his mother in the fac, breaking her nose, and repeatedly striking the man. When his stepfather armed himself with a kitchen knife to defend himself and his wife, McKinney took it away from him and began stabbing both.

When first responders arrived, he resisted police officers, spitting at them, and assaulted a fire lieutenant who was administering first aid. He was jailed on a $510,000 bond at the Oakland County Jail on December 11th and originally charged with assault with intent to murder and resisting arrest.  His stepfather died on December 15th, which will likely lead to upgraded charges.

The fact that an adult man reacted to a simple parental request in such a childish and violent manner is difficult to comprehend. The stepfather’s instinct to protect himself and his wife only served to make a bad situation much worse and ultimately cost him his life. He may have stood a better chance with a handgun if he was physically capable of maintaining control of it, or it could have been taken away and used against both of them, just as the knife was.

Previous article: Springfield Armory's Ronin Should Be On Your List Of Beautiful Handguns To Own Next article: Would-be Burglar Killed By Window When It Fell On Him As He Attempted Entry Into Home