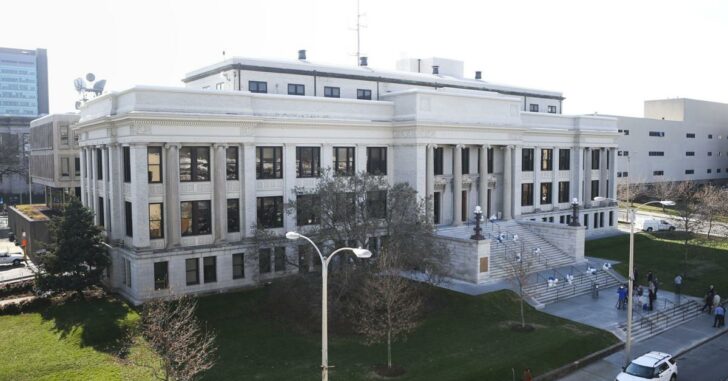 A new law enacted during the 2020 session of the Virginia General Assembly has prompted the City of Roanoke to begin the process of banning guns on city property; but while they took pause, the nearby Town of Blacksburg took action.

Elected officials in both municipalities have wanted to ban guns from city property and events for years but did not have the legal authority to do so.  Numerous attempts to pass legislation at the state level repeatedly failed when Republicans had a say in the matter. The most recent failure followed the May 2019 shooting at a Virginia Beach municipal building that left 12 people dead.

Then, in November 2019, Democrats won a majority in the State Senate, two years after the House of Delegates and the Governor’s Mansion were won by the party. With the power on the left side of the issue, that set the stage for the legislation to be passed during the 2020 session of the General Assembly and signed into law by Governor Ralph Northam, paving the way for localities to ban firearms on city property.

Roanoke Mayor Sherman Lea said that no local ordinance has been drafted, yet, but he expects that when done so, it will probably apply only to the banning of guns inside the municipal building. “The main focus is on the municipal building, and banning bringing firearms into the building,” said Lea. “We have been talking about that for a few years now.”

Lea supports such a ban, and he said he believes a majority of council will approve an ordinance. While the council is not required to hold a public hearing on the matter, Lea is of the opinion that city leaders should hear the views of citizens before voting on such a measure. “We think it’s always right to hear from our public before we take action of this type,” the mayor said. “Some will vehemently oppose [a ban], but that’s the way we govern, by giving everybody a chance to air their views.”

A public hearing was originally set for January 19th, but after seeing the events of January 6th at the U.S. Capitol and consulting with Vice Mayor Trish White-Boyd and City Manager Bob Cowell, the mayor voiced concerns about holding the hearing on the last evening of President Trump’s term.

“Given what happened [Wednesday in Washington D.C.], we think it’s a good idea to let people slow down a little bit and give everybody a chance to think things through,” Lea said. A new date has not yet been set, but it will now occur under the Biden administration, which also has an aggressive gun control agenda.

In nearby Blacksburg, home to Virginia Polytechnic Institute and State University (Virginia Tech), the site of the 2007 mass shooting that left 32 dead and 17 wounded, the town council met on January 12th and wasted no time in unanimously approving a gun ban on town-owned property. It also extends to town-permitted events on public property, such as the annual Steppin’ Out.

Blacksburg Mayor Leslie Hager-Smith said citizens have been requesting a ban since the 2007 tragedy. About a dozen people came to speak to the council on the matter.

Cole Harden was one of only a few town residents who spoke against the ban, saying, “I’m stunned that my local leaders are going on the attack; this proposition offers no tangible benefit whatsoever to the town or its residents.”

Council members remarked they received the largest amount of emailed commentary, possibly ever, on the topic, but added that the “super majority” of emails received against the ban were from those out of town.

A few other locals spoke in favor of the move, including Steve Gillespie who said, “I just wanted to express my appreciation for the courage of our Blacksburg Town Council for taking this on after so long.”

The town was prepared for both an overflow crowd and a confrontation.  Extra seating, socially distanced of course, was under the watchful eye of about a dozen police officers, including Blacksburg Police Chief Anthony Wilson.

Ironically, none of the victims or bystanders in the Virginia Tech or Virginia Beach shootings were armed or otherwise prepared to defend themselves or others with lethal force. In both cases, electronic locks on security doors, and in the VT case, chains and padlocks placed by the shooter, slowed the response of police. The Virginia Tech incident ended only when the shooter committed suicide, and the Virginia Beach incident ended when police finally gained access to the building and killed the shooter.

In the days that followed the Virginia Beach shooting, an attorney representing the family of one of the deceased victims revealed a chilling fact.  The shooter was a city employee who had a history of disciplinary issues and minor altercations with co-workers. The victim’s family said that she had contemplated taking a pistol to work with her that day because of the man’s history but did not do so because there was a city policy forbidding it. Her adherence to the policy kept her from being able to defend herself, and possibly others, from the shooter.

Laws such as those that were enacted by Blacksburg and are imminent in Roanoke and other left-leaning Virginia localities only serve to disarm law-abiding citizens, denying them of the right to defend themselves against murderers who have no regard for any law.