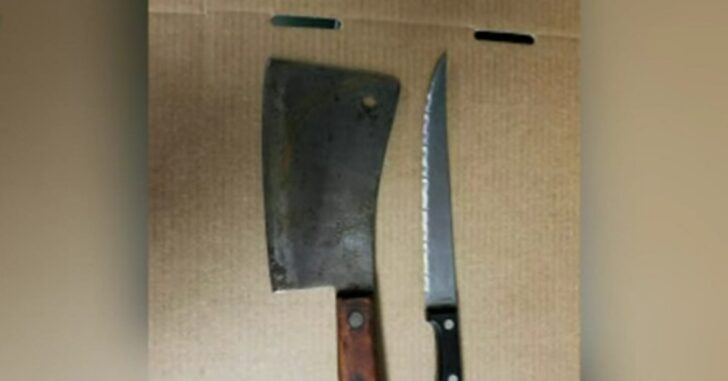 WILLISTON, FLORIDA – Most of us have heard the statement “don’t bring a knife to a gunfight” ad nauseum…right?  Well, on Thursday a Florida man took it up a notch and discovered the hard way that bringing two knives to a gunfight really doesn’t work any better than one. After he stabbed two people, he was shot by a neighbor.

According to Levy County sheriff’s deputies who responded to NE 136th Ave east of Bronson, they found 34-year-old Jeffrey Gregg suffering from a gunshot wound to the abdomen. He was transported to a hospital and listed in critical condition and is facing multiple felony charges upon his release.

Witnesses told investigators that Gregg had gotten into an argument with his neighbors earlier in the day on Thursday, making threats and even firing warning shots into the air from his gun.

Later in the day, he showed up on his neighbor’s property brandishing two edged weapons: a large knife and a large meat cleaver.  He then stabbed two people who were there. One of the victims, identified as Walter Seibert, pulled out a pistol and shot Gregg once in the stomach.

Investigators said the shooting appears to be an act of self-defense, and that the initial argument apparently stemmed from illegal drug use. For anyone taking notes, don’t use illegal drugs and don’t bring two knives to a gunfight.

Previous article: Constitutional Carry Coming To Utah: What You Need To Know Next article: [VIDEO] Open Carrier Has Gun Snatched At Convenience Store