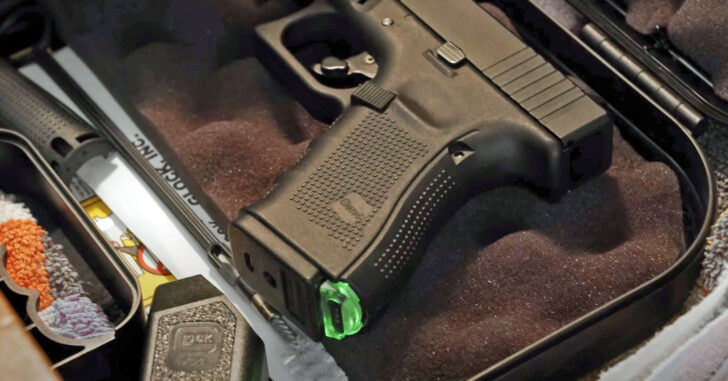 Aaaaand we have another entry in the smart gun sweepstakes. This one comes from a new player in the space, Machine, Inc., who says their SafeOp system is the “world’s first digital aftermarket safety trigger” and installs in a standard GLOCK 19 Gen4 and Gen5 pistols (they promise versions for other GLOCK pistols down the road).

Machine, Inc. issued a press release today announcing the SafeOp system, just a week after longtime anti-gun Congresswoman Carolyn Maloney introduced a new bill she calls the Handgun Trigger Safety Act. Among other things, the bill would shell out “grants to develop and improve “personalized” handgun technology to increase efficacy and decrease costs.”

So that’s a nice coincidence.

It’s not clear from the video or the company’s web site whether the SafeOp system is activated via Bluetooth or RFID, but the system features “lightning fast lock and unlock”… controlled via a smartphone or smart watch ap.

The SafeOp also appears to recognize when the designated user has left the immediate area, disabling the pistol and reenabling it when the user returns.

Machine Inc. unveiled SafeOp, a revolutionary trigger safety system allowing a firearm to be locked or unlocked securely from a SmartPhone or SmartWatch. Sold as an aftermarket trigger kit, this breakthrough allows existing firearms to be cost effectively and easily retrofitted with new smart gun technology.

This innovation comes at a time where new legislative proposals focused on gun safety are being unveiled.

House Oversight and Reform Committee Chairwoman Carolyn Maloney (D-N.Y.) on February 10th unveiled a legislative package of five bills focused on gun afety. One of the proposals, the Handgun Trigger Safety Act, would incentivize the development of “smart-gun technology.” The bill would also mandate that within ten years of enactment anyone selling a handgun must retrofit it with personalization technology before that sale can be completed.

Machine Inc. is currently taking pre-orders for the Glock 19 pistol and expects to deliver the first batch in May 2021.

The SafeOp is listed with a retail price of $398, but Machine, Inc. is taking preorders now for half that amount with an estimated delivery date of May, 2021.

We’ve reached out to Machine, Inc. to find out more and will report back once we hear from them.