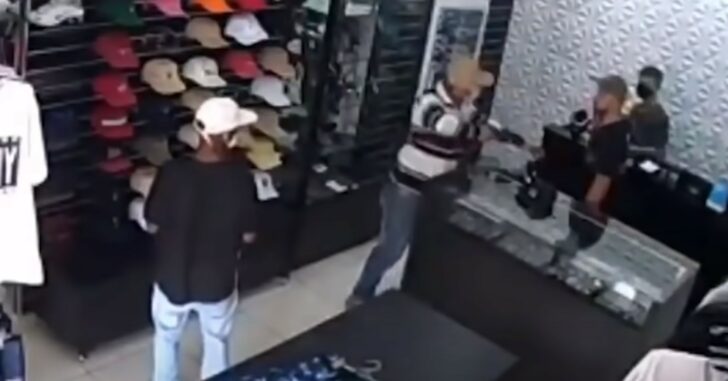 A store owner in Brazil decided to approach a robber with a gun, draw from appendix, and get shots on all three targets. Reports suggest that the man’s father was shot and killed during a robbery at the same store a few months ago.

Not taking any chances, the store owner was armed and carrying a firearm in the appendix position. Three people walked in, pretending to shop and be interested in items. Eventually, one of them pulls a gun and announces a robbery.

The owner moves towards the man with the gun, something many people would not do. He then draws while having a firearm pointed at him, and a gun battle ensues. The owner got his shots on target, and you can see in the video where he moves the muzzle of his gun in different directions as he fires at multiple robbers.

All 3 of the robbers died at the scene. No one else was injured.

It’s worth noting that the store owner fled the scene before police arrived. This could have been out of fear over what just happened, or the owner could have possibly been in possession of an illegal firearm. Reports were not clear, but it does sound like police were able to talk with the store owner after the self-defensive shooting took place.