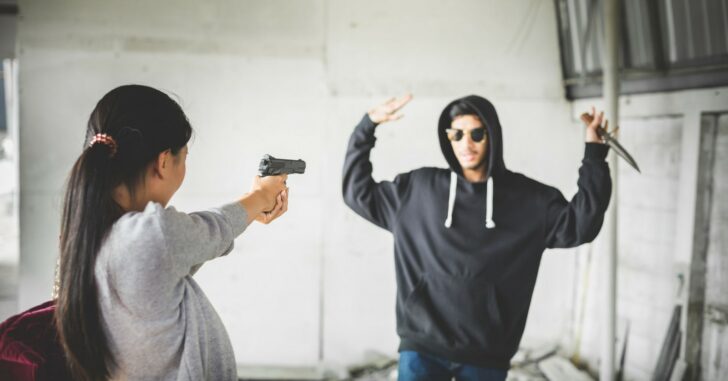 SEBRING, FLORIDA – A female motorist used her handgun to deter a group of men who intended to rob her and possibly worse. She was sitting in her vehicle in a parking lot near the intersection of Oak Avenue and South Pine Street when four to five men approached her, according to police.

One of the men ordered her from the vehicle at gunpoint while demanding that she hand over her purse and phone. Another man simultaneously entered her vehicle and began rummaging through it, demanding her keys, phone, and wallet.

Despite being greatly outnumbered, having one man in her vehicle and another one holding her at gunpoint, the woman managed to draw her firearm and discharge it, causing all of the men to flee the area. Police do not believe that any of the alleged suspects were struck by the bullet, and all of them are still at large.

Police say that they also received reports of vehicle burglaries in the Hickory Street and Eucalyptus Street area during the same time frame of this attempted robbery occurring. They are soliciting help from anyone who may have information or security camera footage from the area and the investigation is continuing.

Previous article: Man Assaulted and Shot with BB Gun Over Not Wearing a Facemask Next article: Occupant Shoots Intruder In Self-Defense During Late Night Home Invasion