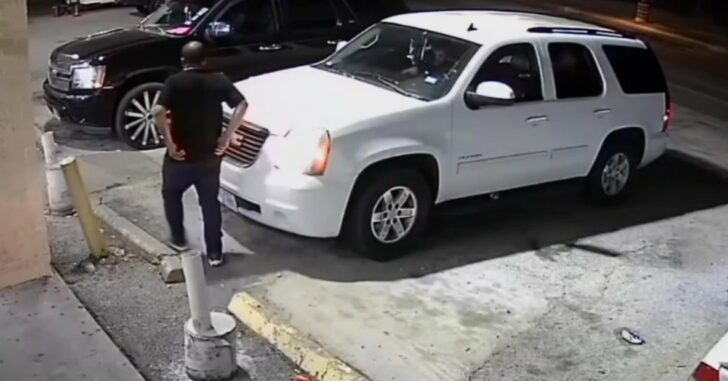 HOUSTON, TEXAS — A family vehicle was carjacked by a group of men who pulled up along side the vehicle at a convenience store, scoped things out and then sprung into action. The owners of the vehicle were inside the store when the bad guys made their move, but there was a 10-year-old girl in the vehicle at the time.

Two men get out of the Yukon, exchange some words and then one of the men got into the victim’s car. Police said the suspect noticed a child was in the back seat and threatened to harm her if she did not get out.

The girl is seen on camera opening the back door of the car and getting out, running into the store. The suspects then take off with both vehicles.

Thank God the suspect told the girl to get out instead of leaving with her.

As for lessons, three come to mind;

All of these things seem pretty simple to accomplish, and would have made things much more difficult for the suspects, likely to the point where they would have simply left and searched for a new target.

Previous article: Two Men Commit A Crime – Now One Is Dead And The Other Is Charged With His Murder Next article: If You Happen To See Brian Laundrie, Remember That He's Not A Fugitive