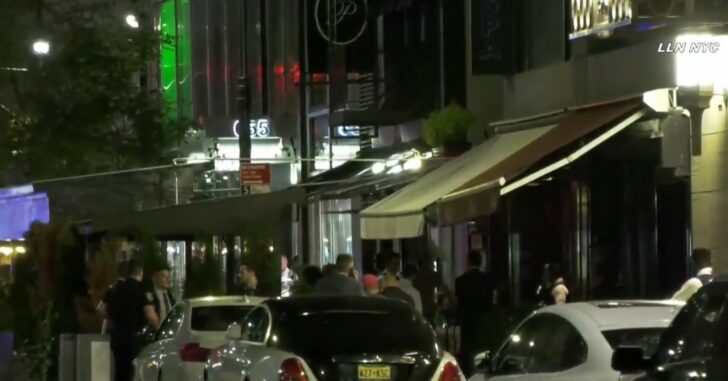 MANHATTAN, NEW YORK – A man on a first date with a woman was shot after he struggled with an armed robber Wednesday night. According to an NYPD spokesperson, it occurred about 10 p.m. in front of the upscale Chinese restaurant Philippe on East 60th Street near Madison Avenue.

Witnesses were shocked at how quickly everything happened when a Mercedes rolled up in front of the eatery. Two masked men jumped out and immediately targeted diners at two tables in the outdoor dining area.

A 31-year-old man at one of the tables lost an expensive Rolex watch to one of the robbers. A 28-year-old man at another table refused to be a victim and grabbed the other robber’s gun, struggling with him for control of the firearm. Shots were fired and the intended robbery victim was struck in the leg by a bullet.  Other customers in the area scrambled for safety.

The suspects disappeared as quickly as they had appeared, fleeing westbound on East 60th Street in a dark-colored SUV.  The shooting victim was transported to a local hospital for treatment, and his condition was not known.

Police recovered a gun on the scene, and do not believe that there was any relationship between the victims and the suspects, according to authorities. The suspects remain at large, and the investigation is continuing.

A woman on the scene said that she was on a first date with the shooting victim. There is no word if there will be a second date, but the first will certainly be memorable for all the wrong reasons.

Getting into a physical struggle over a loaded firearm seldom ends well, especially if you are not the one who has initial possession of it. Every situation is different, but in most cases it is usually far better to surrender your belongings rather than risking loss of life.

Previous article: University of Florida Students Sign Petition To Abolish The Constitution, Because The Constitution Allows Them To Do So Next article: Double Murder In Utah Being Looked At For Possible Connection To The Disappearance Of Gabby Petito