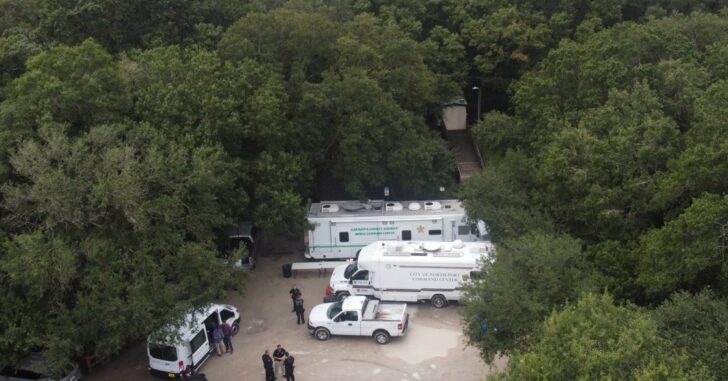 Brian Laundrie is a 23-year-old resident of North Port, Florida who is currently in national headlines after he returned home from a cross-country trip early without his fiancee, Gabby Petito. Additionally, Petito hasn’t been seen or heard from by anyone, including her family.

It wasn’t until September 11th that her family reported her missing, after realizing that Laundrie had returned without her. Laundrie has also refused to speak with police or the FBI. He was considered a person of interest in Petito’s disappearance earlier this week.

Then, the family of Laundrie requested that the police come to their home to talk. They did just that, only to find out that the family was reporting Laundrie missing since Tuesday, and left the home with a hiking backpack.

With additional information from the family, police began (and are still currently) searching the Carlton Reserve, a 25,000-acre park in Venice, Florida.

Additional photos from the search for Brian Laundrie around the Carlton Reserve area. If you have seen him please use 1-800-CALL-FBI or submit online at https://t.co/vlIagGqNPE. pic.twitter.com/X5QZmMJhTq

Most of the Country, at this point, knows what Laundrie looks like and is aware of the current information that’s out there. While the situation doesn’t look good as a whole, the reminder needs to be made that Laundrie is not a fugitive, and is currently not facing any charges.

With that said, someone will likely, at some point, come into contact with Laundrie if he’s wandering around in the woods by himself. There have been many stories over the years what we’ve covered where armed citizens have recognized fugitives from justice and confronted them, but this is not one of those cases.

While things do not look to be in favor of Laundrie, the facts simply aren’t out. With many emotions high in regards to his silence over his missing Fiancee, I fear that someone could come into contact with him and make matters worse.

“OMG That’s him!” *pulls out firearm and attempts to hold him at gunpoint*

^^Nothing about that is legal or justified.^^

If police do find Laundrie, they are simply going to return him to his home. It’s all they can do because, again, he hasn’t been charged with any crime.

I write this article for a number of reasons. First, I am a stone’s throw away from the location where police are searching, and am absolutely in a location where coming across Laundrie is a possibility. Second, I wondered how I’d react if I spotted him. Sure I’d want questions answered just as the rest of the Country, but it absolutely wouldn’t be up to me to try and keep him in that location until police arrived. Remember, he’s a missing person, not a fugitive. Third, I can (sadly) see someone trying to hold him at gunpoint, or something similar, to try and control the situation.

If you have seen him please use 1-800-CALL-FBI or submit online at http://tips.fbi.gov.

Do not take matters into your own hands, because there are no matters to take.

The search for Petito also continues.

Previous article: Family Carjacked While Inside Store And Their 10-Year-Old Still In The Vehicle Next article: University Student Fatally Shot In His Sleep By Negligent Gun Owner In Neighboring Apartment