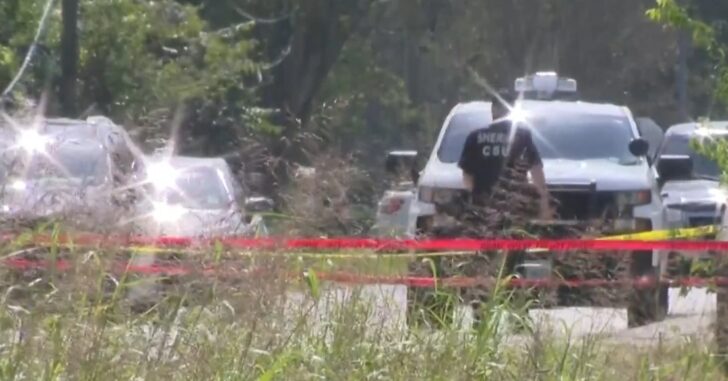 HOUSTON, TEXAS  – An alleged robber was shot by his intended victim Wednesday morning in northern Harris County. Deputies with the Harris County Sheriff’s Office were dispatched to a reported shooting in the 9500 block of Sunnywood Drive around 11:30 a.m.

Upon arrival they found a male suspect lying in the road suffering from apparent gunshot wounds and another man standing nearby with a firearm in his hand.  The wounded man was transported to a local hospital in critical condition. The armed man was determined to be the victim and was questioned by deputies.

He told investigators that he was walking home from a job interview when a white Ford Transit van with two masked men stopped beside him. He stated that an armed man exited the passenger side of the van and approached him. The victim, who was also armed, drew his handgun, and shot the suspect multiple times in self-defense. The driver of the van fled the scene, leaving his wounded accomplice bleeding in the street. The 24-year-old victim then called 911to report the shooting.

His story was corroborated by Minister David Woodruff of the nearby Hidden Valley Church of Christ. He recounted hearing a loud sound, saying “We went and opened the door and looked out and there was a man laying in the street and another man standing with a gun in his hand. At first we didn’t know what was going on. The man, obviously, with the gun was not interested in hurting anybody or anything like that.” Woodruff, who has been at the church for two decades, commented that the area is usually quiet and that “it was all pretty fast”.

The intended victim was not injured in the incident and is cooperating with investigators. He did not know either the driver or his assailant and likely will not face any charges. The suspect, who was upgraded to stable condition most certainly will be charged, and deputies are still seeking the driver who fled the scene.

Previous article: BREAKING: Remains Found In Florida Park Confirmed To Be Those Of Brian Laundrie Next article: Alec Baldwin Has Prop Gun "Mishap" On Movie Set, Killing One And Injuring Another