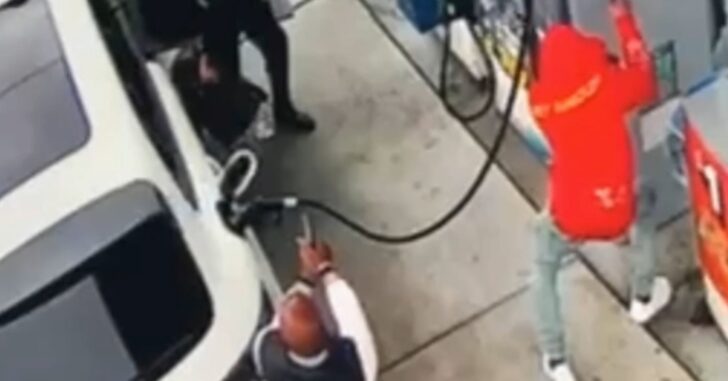 OAKLAND, CALIFORNIA — A retired and highly decorated Oakland police officer was victimized in a robbery while pumping gas Saturday afternoon. Retired OPD Captain Ersie Joyner drew his concealed weapon during the robbery, fatally shooting one of the suspects.

Speaking about the incident which occurred just after 1 p.m. at a gas station near 17th and Castro streets, Chief Leronne Armstrong said “Today is really something that is impacting our entire city, our community. It’s a tragic situation. But then, it’s another senseless crime that happened in our community.” The Chief also commented that the shooting marked the city’s 115th homicide for 2021.

Video obtained by NBC Bay Area clearly shows the incident as it happened. The retired officer was gassing up his SUV when three people wearing hooded sweatshirts approach him and start shaking him down between his vehicle and the gas pumps. When the three move and one opens the door to his SUV, Joyner draws his concealed weapon and fires, fatally wounding one of his attackers.

When Joyner stepped around the pumps to see where the other two assailants were, he was shot six times.  He was rushed to a medical facility and underwent emergency surgery.

Joyner retired from the department in 2019 as one of the most decorated officers in the OPD, rising through the ranks to become a Captain.  Ironically, he also headed up Oakland’s landmark “ceasefire” program, which brought together police, community leaders and gang members in an attempt reduce in gun violence.

Captain Joyner is recovering from his wounds, but no update on his condition was available. Joyner is currently co-owner of a marijuana dispensary, the Joyus Recreation and Wellness Group in Oakland.

As the investigation continues, police are looking for two suspects who fled in a black for-door sedan. Anyone with information can contact the Homicide Section at 510- 238-3821 or the TIP LINE at 510-238-7950.

Previous article: Houston ATM Robbery Reminds Us To Stay Away From The ATM After Dark And Be Mindful Of Our Surroundings Next article: Husband Fatally Shot After Fight Over Handgun He Pointed At His Wife During Fight