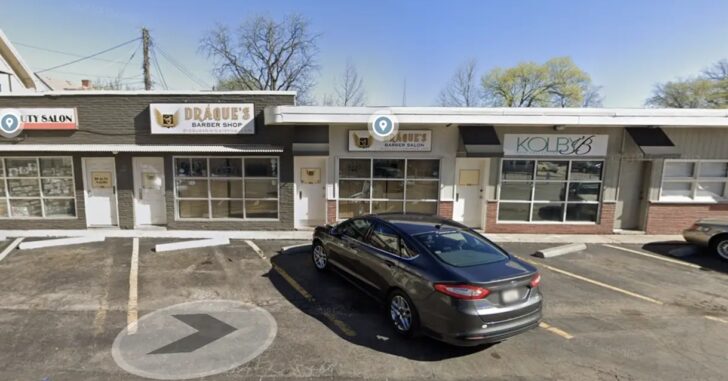 KANSAS CITY, MISSOURRI – A barber shop owner was shot and nearly executed by a man unhappy with his haircut, and he wasn’t even the barber who gave him the cut. The incident unfolded outside of Dráque’s Barber Shop at 106 West 39th Street.

Police were summoned to the scene and on arrival, found a man sitting on the shooting suspect to keep him from leaving the scene. That suspect, 33-year-old Vernie Dickens, is accused of shooting the barber shop owner.

According to what investigators have learned from various witnesses and the victim, Dickens came into the barber shop on June 2 angrily complaining about a haircut that he had received there the day before. The barber who did the cut was not there, so shop owner Dráque Murff told the man to have a seat.

Unhappy with the customer service, Dickens reportedly turned aggressive, began yelling and fired a gun twice at Murff. Other customers in the shop at the time said that there were also several children present at the time.

The victim stated that he ran from the shop to escape Dickens and was shot in the back as he failed to clear a fence that he attempted to jump as he was fleeing. He said that Dickens then stood over him and pulled the trigger. Fortunately, the gun malfunctioned and failed to fire. By that time, a customer was able to intervene and prevent further harm to the barber.

Murff was treated for his injuries and is recovering after a bullet missed his spine by only inches. He has started a fundraiser to “bring awareness to mental health issues, addiction, and gun violence,” stating that the money raised will be donated to a non-profit organization for underprivileged children.

He told a local reporter that he thought Dickens was going to “execute” him, saying, “It was a terrible situation, lying there with a gun to my head. I said one more prayer. He pulled the trigger and I just heard a click.” Commenting on the customer’s complaint that started the whole chain of events, Murff said, “It wasn’t even a bad cut.”

Dickens has been charged with first-degree assault, unlawful weapon use, and two counts of armed criminal action, and is being held in the Jackson Count Jail on a $75,000 bond.