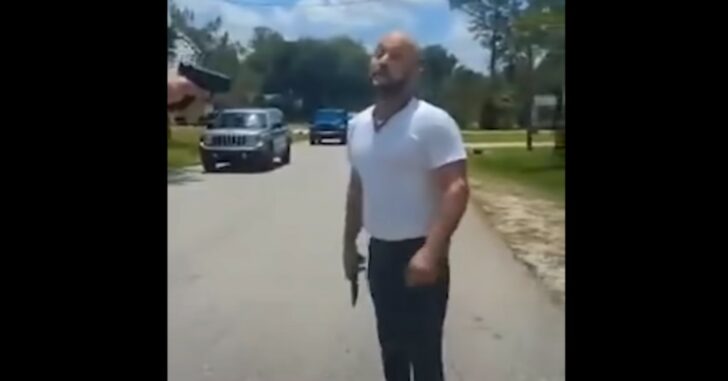 FLAGLER COUNTY, FLORIDA — A lawfully armed concealed carrier was lucky he didn’t get stabbed by a man who he was having a big of road rage with. The altercation first began as knife verses brass knuckles, which isn’t the correct choice, especially if you already have a gun on you.

As soon as someone pulls a knife on you and threatens you, that’s go-time to draw your firearm and try to de-escalate the situation and more importantly, try to allow yourself to be removed from the situation entirely.

The video of the incident has a lot of cringe, especially the woman who is filming the encounter, who is the significant other of the legally armed man. I’m sure she would do great in an intimidation match, but no where else.

The armed citizen is lucky in this situation because while he was holding his brass knuckles, the man with the knife took a significant swipe at him with that knife. It was only at this point that the man drew his concealed firearm and pointed it at the wannabe knife-slasher.

That could have been too little too late for the armed citizen, and he’s lucky he didn’t get stuck and have an even bigger fight on his hands.