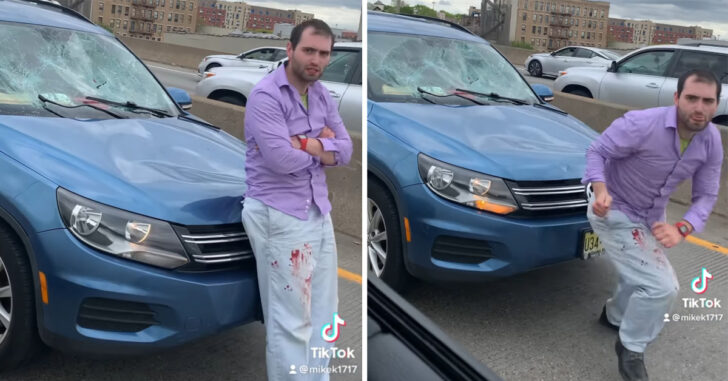 Update: This incident seems to have taken place in the Bronx, which means that most attempts at defending yourself could come with criminal charges, such as with a knife or firearm.

A man was driving down the highway when he witnessed a vehicle’s windshield being smashed by another man. The driver inside the vehicle being assaulted was not doing much and seemed trapped in the situation.

The witness was recording video with his cell phone and when he came up to the vehicle and the man, who at this point had stopped the attack and was leaning up against the front of the vehicle, the man lunged at him.

Luckily for the driver recording, his window was up and he was able to get away.

We look at all scenarios from an armed citizen’s standpoint, and/or the standpoint of a person wanting to be in charge of their own safety.

I am not sure what sparked this encounter to begin with, but the man in the vehicle being attacked seems to be a sitting duck if the attacker decided to take his aggression out on him physically. I’m not sure if the victim had any tools available to him inside the vehicle, but this suspect is a clear threat to him and depending on where this incident occurred, would likely have been within his rights to use deadly force against him.

As for the person taking the video, do so in a safe way because as we see here, people can be very unpredictable and can change course quickly. The witness had his window up and was able to drive off, saving himself from any potential harm by the suspect.