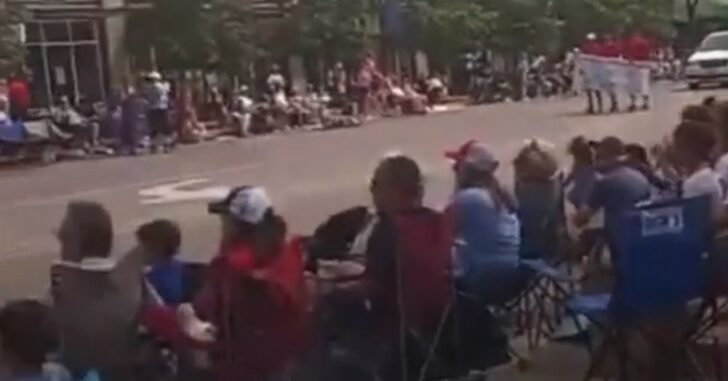 Recognizing the sound of gunshots is something that everyone should truly know, but especially on a day like the 4th of July, those sounds could easily be mistaken for fireworks.

The mass shooting that occurred on the 4th in Illinois happened during a 4th of July parade, which has provided many videos of the incident as people were recording the parade and their time with family and friends.

During each video that I’ve located, at the start of the shooting, the vast majority of people took quite a while to realize what was going on. Those seconds are valuable and even if it turns out what you were over-reacting to something that wasn’t shots being fired, it’s still a good idea to be in the mindset to act quickly.

WARNING: This is what a mass shooting looks and sounds like.

Video just sent to me from Highland Park shooting. This scares the shit out of me. pic.twitter.com/E6eKP9spjh

Another shot from the Highland Park mass shooting.

Hadn’t seen this clip on here.
Sounds like nearly 60 shots fired in this one alone. pic.twitter.com/X66gqEiGHD

This man put his son in a dumpster to shield him from any potential shots fired in their direction.

A father who witnessed the July Fourth parade shooting in Highland Park, Illinois, describes the horrific scene as he hid his son as shots were fired. https://t.co/2p1c5F2ur0 pic.twitter.com/6kZ1cR7P7j

Other videos show the chaos in the seconds following the initial gunfire, with people seen running with their families to safety, away from where they believe the shots are coming from.

A white male suspect (who is STILL at large) aged between 18-20, shot from a roof during the Highland Park 4th of July Parade, and killed 6 ppl, injuring dozens.

If police would focus on THESE potential shooters instead of ambushing innocent Black ppl, this wouldn’t happen pic.twitter.com/2QhNURdIrU

It’s a sad time for our Country, as these mentally ill people feel the need to resort to such violence and take the lives of innocent people. I’d love to talk about how a lawfully armed citizen could have stopped this suspect, but it’s highly unlikely that any attempt would have been successful.

From a survival standpoint, it’s important to understand and communicate with family and friends what to do in certain situations, what to look out for, and what sounds and actions to pay attention to.