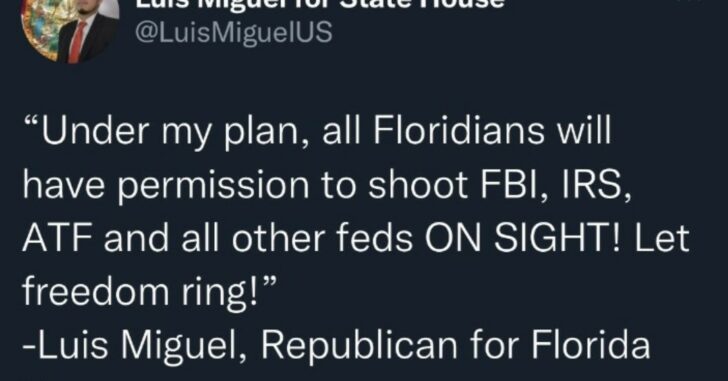 “Under my plan, all Floridians will have permission to shoot FBI, IRS, ATF and all other feds ON SIGHT! Let freedom ring!” – Luis Miguel, Republican for Florida.

As responsible gun owners, we would never condone that lethal force be used against anyone unless a life was in danger, and the justified use of self-defensive measures was warranted.

Statements such as this from people on the right are no good for gun owners or the advancement of thoughts and feelings on the 2nd Amendment as a whole, and it makes us look bad even though we don’t share the same thoughts as Mr. Miguel.

He’ll be labeled a “crazy right-wing gun nut”, and guess who else gets lumped in with him?

I understand that some folks might be upset with the way our Country is headed, or whatever the case may be, but there are certain lines that shouldn’t be crossed, and certain morals and ethics that should always remain intact.

Previous article: Hero Boyfriend Shoots Female Robbery Suspect, Dying In The Process And Saving His Girlfriend's Life Next article: Trespasser Is Shot By Homeowner After Assaulting Man On Property