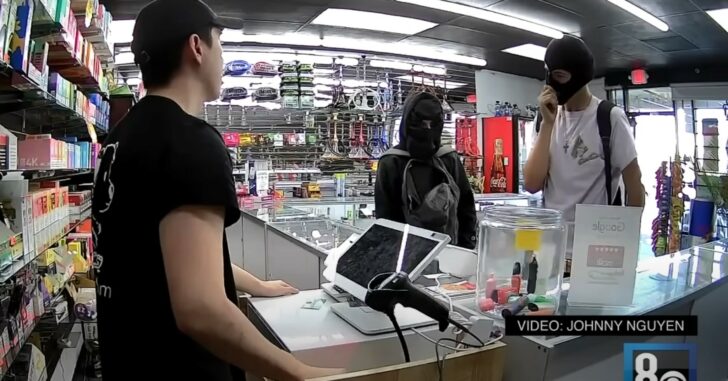 A Las Vegas smoke shop owner made headlines after an attempted robbery at his business. Two people entered in ski masks, later identified as juveniles, and were acting a bit strange. The owner asked why they were wearing masks, to which they didn’t respond.

Soon after, one of the suspects grabs a jar from the counter that apparently had money in it, and the owner told him he could take it but leave the change. The suspect then tries to grab something else, and at the same time the other masked robber jumps the counter.

Once that counter was jumped, the owner produced what appears to be a knife and absolutely went to town.

The suspect is stabbed multiple times and exclaims at one point, “I’m Dead”, while his buddy runs out the door.

That suspect would in fact not be dead, and instead taken to the hospital and will now face charges along with his masked sidekick.

“It was kind of adrenaline rush and fight or flight even thinking about it now my heart rate is a little bit elevated,” the store owner said.

“I don’t think he planned on getting stabbed that day obviously, but if you try robbing a store you are taking a risk. This is a small business obviously,” he added.